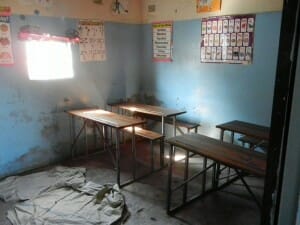 In December 1999, Dr. Richard Bail first visited the preschool at the Society for Women Against AIDS in Zambia (SWAAZ) Family Support Home in Mandevu Compound in Lusaka, Zambia. Thirty children were crowded onto three narrow benches. The schoolroom was about 10 x 12 feet. The only light came from one tiny window. The only teaching tool was a crumbling blackboard, but there was no chalk. The teacher was a volunteer without any training beyond secondary school. The children were learning by rote repetition. The teacher spoke, and the children simply repeated in unison what they had heard. Realizing that this would be the only education many of these orphans and vulnerable children would ever receive, Dr. Bail was motivated to change this situation so that their human potential would be given a chance to be realized, and Communities Without Borders was born. 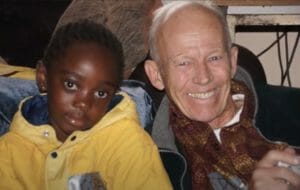 Dr. Richard Bail, the driving force behind CWB for 20 years, envisioned the creation of a “model community school” with the Sekelela Community School. To honor his legacy, we are embarking on an exciting new building project to add three classrooms and a cooking facility at this school. The Dick Bail Fund is targeted to this building project.

Dick Bail expressed his vision of model community schools in Zambia by writing this imaginary newspaper article in the future.

Dick Bail recorded his thoughts about potential directions for CWB.

In celebration of Dick Bail’s life

Photos of Dick Bail from our CWB albums.

Interview with Dick Bail
On February 11, 2019, Beau Stubblefield-Tave, Managing Principal of the Center for Culturally Fluent Leadership, interviewed Dick Bail. Dick talked about being a physician, FUUSN, anti-racism work, his involvement in world health and Africa, Communities Without Borders, teamwork, Ubuntu, philosophical ideas, cultural competency, gratitude, family, and facing cancer and death.
Beau summed it up to Dick: “Your life has truly been amazing and inspirational.”

The Passing of Richard Nelson Bail, written by his son, Chris Bail.