We plan to reschedule this concert for next spring. 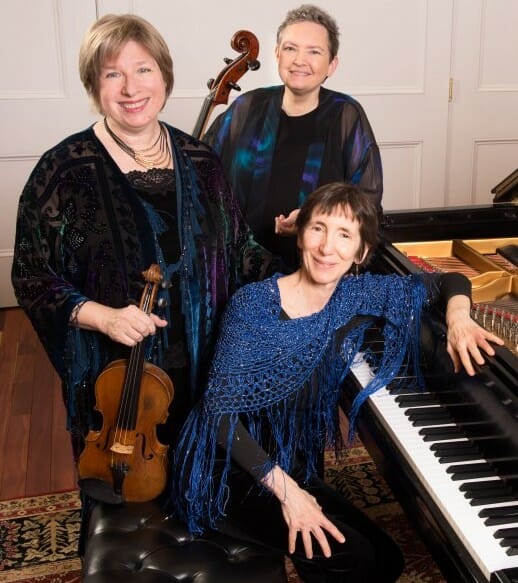 Celebrating the Radiance, Wit and Humanity of Mozart’s Music

Mozart is the highest, the culminating point that beauty has attained in the sphere of music. No one has made me weep, has made me tremble with rapture, from the consciousness of my nearness to that something which we call Truth, as he has done.           – Peter Ilyich Tchaikovsky

Ticket holders are invited to a talk by the musicians one hour prior to the concert. 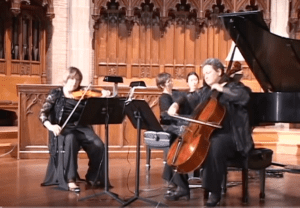 When the award-winning and internationally known Triple Helix Piano Trio musicians—violinist Bayla Keyes, cellist Rhonda Rider, and pianist Lois Shapiro—joined together in 1995, The Boston Globe described the results of their union as “the livest live music in town,” with “wildly imaginative, emotionally charged, virtuoso playing” that was “sophisticated in musical detail, wholeheartedly interactive, uninhibited in emotion, and touched by a special grace.” Subsequently, the ensemble has become known as one of the best piano trios on today’s musical landscape.

Soprano Ann Moss is an acclaimed recording artist and champion of contemporary vocal music who performs and collaborates with a dynamic array of living composers. Her high, silvery, flexible voice has been singled out by Opera News for “beautifully pure floated high notes” and by San Francisco Classical Voice for “powerful expression” and “exquisite phrasing.” A native of Boston and a graduate of Hampshire College, the Longy School of Music of Bard College, and San Francisco Conservatory, Ann Moss currently resides and teaches in the San Francisco Bay Area with her husband, violist Justin Ouellet. Ann is a Reiki practitioner, enthusiastic Yogi, and pursues a lifelong interest in Traditional Chinese Medicine. 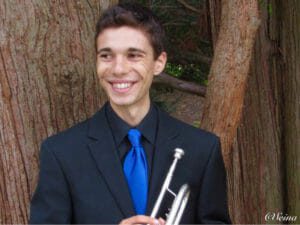 Conductor, trumpeter, and singer Luca Antonucci brings dynamism and incisive musicianship to performances throughout New England. A native of Watertown, MA, Antonucci holds an M.M. in Orchestral Conducting from the Hartt School, where he studied with Edward Cumming and Glen Adsit. Luca is the recipient of a B.A. from Amherst College, where he graduated summa cum Laude in 2014, Luca spent the 2014-15 academic year as a Fulbright Fellow in Vienna, Austria, where he published work on Arnold Schönberg in the Journal of the Arnold Schönberg Center. His article, “Schönberg Conducts Mahler: Exploring A Performance from Schönberg’s East Coast Year” can be found in the Journal of the Arnold Schönberg Center. Equally at home on the podium or in the opera pit, Luca has appeared alongside faculty, students, and guest artists with the Hartt Orchestra, Foot in the Door Contemporary Ensemble, the Hartt Opera Theater, and the Hartt Brass Ensemble. He has also served as Assistant Conductor of the Pioneer Valley Symphony, and Conductor and Music Director of the Pioneer Valley Symphony Youth Orchestra. Luca has appeared throughout the US and Europe in conducting masterclasses with faculty including Benjamin Zander, Paul Vermel, Donald Portnoy, Peter Jaffe, Diane Wittry, Neil Varon. ​An enthusiastic advocate of choral music, Luca founded the Brookline Chamber Singers in 2016, which raised almost $500 in its inaugural year for the Womens’ Lunch Place of Greater Boston. Luca has also served as the Assistant Music Director at the Church of St Mark the Evangelist in West Hartford, CT, and is serving as Conducting Intern for the Zamir Chorale of Boston for the 2017/18 season. Luca maintains an active schedule as a performer on the trumpet, performing solo and in chamber settings, as well as a member of jazz bands, orchestras, and wind ensembles throughout the Boston area. He is especially interested in free improvisation and the traditional brass band literature of Eastern Europe. In 2014/15, Luca was recognized as Official Musical Ambassador of the Musikverein Leopoldau, an award-winning wind band in Vienna, Austria. Luca is a member of the faculty of the Rivers Summer Music program in Weston, MA, where he teaches music theory and directs the Wind Ensemble. He also maintains a private trumpet studio and directs the Band at the Brimmer & May School in Chestnut Hill, MA.

The youth group at FUSN has planned a benefit event for Communities Without Borders, featuring many talented young performers from Newton and beyond. Please join us on Saturday, March 4, at 6:30 PM, at FUSN in West Newton.

Get your tickets here

When the award-winning and internationally known Triple Helix Piano Trio musicians—violinist Bayla Keyes, cellist Rhonda Rider, and pianist Lois Shapiro—joined together in 1995, The Boston Globe described the results of their union as “the livest live music in town,” with “wildly imaginative, emotionally charged, virtuoso playing” that was “sophisticated in musical detail, wholeheartedly interactive, uninhibited in emotion, and touched by a special grace.” Subsequently, the ensemble has become known as one of the best piano trios on today’s musical landscape.

The Belmont Music Festival and the Belmont Festival Orchestra were established in 2010 to bring free orchestral concerts directly to the citizens of Belmont and nearby communities, seeking to cultivate new audiences with exciting performances of the most beloved works of the classical repertoire. Since then, the Belmont Festival Orchestra has developed a passionate local following, performing for packed audiences at their home in Belmont’s Beech St. Center and now in other venues around the Boston area. A group of friends, the all-volunteer orchestra includes professional, amateur and conservatory players, united by their belief in the transformative power of music and grass-roots community-building through the arts.

Conductor Nathaniel Meyer is currently working as the musical assistant to his teacher and mentor, Benjamin Zander, conductor of the Boston Philharmonic. Nathaniel recently returned from a seven-week tour of Europe, in which he assisted Maestro Zander in engagements throughout Spain, Estonia, England, Israel and Sweden. In addition to his musical education, Nathaniel studied German and philosophy while a student at Yale and in Heidelberg, Germany. He received his Masters degree in Orchestral Conducting from Indiana’s Jacobs School of Music in Bloomington, where his teachers were David Effron and Arthur Fagen. There, he began to study opera conducting, with a special focus on the music of Richard Wagner. Nathaniel has also studied in masterclasses in Europe with renowned Estonian conductor Neeme Järvi and Jorma Panula of Finland. Before an embouchure injury led him to take up conducting, Nathaniel was an award winning trumpeter, performing frequently as a soloist and taking first place at the National Trumpet Competition and the International Trumpet Guild in 2007. Since then, he has been the winner of Yale’s Wrexham Prize in Music, the Artistic Excellence Award from Indiana University, and the LaGuardia Conducting Competition.

Get your tickets here

Let’s get together for a Jazz Concert to benefit Communities Without Borders. You may have heard the Upswing Jazz Quintet perform at Coffee House in March. They are back with special guests for a benefit concert on Friday, November 18, at 7:30 PM, at FUSN in West Newton. Please invite your family and friends! 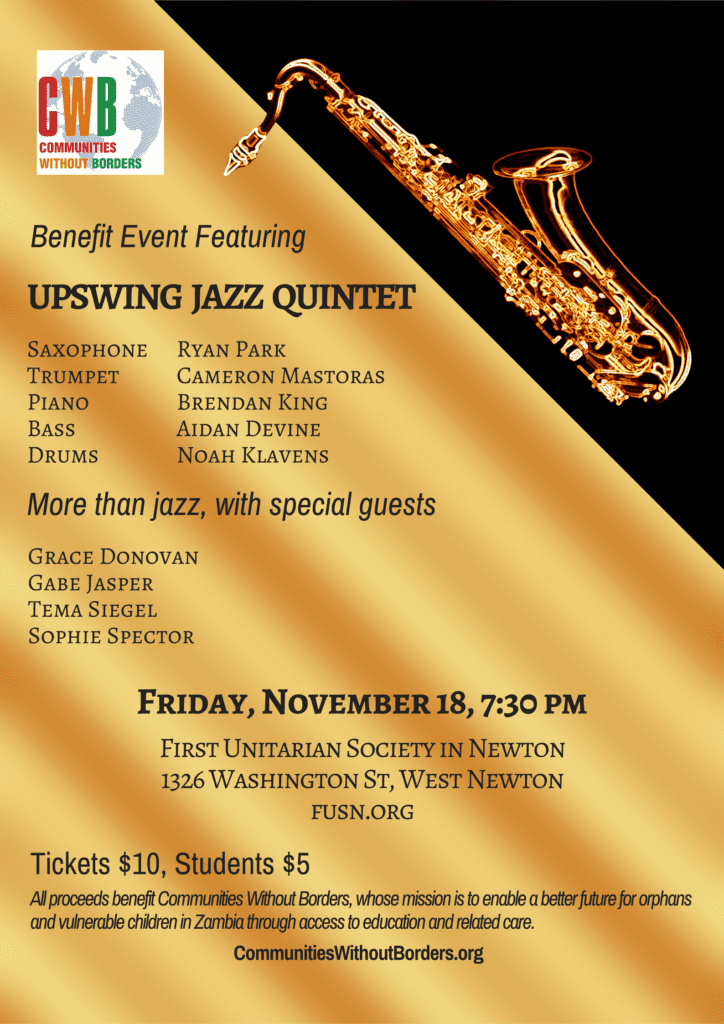